The horror story of Nicaragua is not ending.

Early morning today, students from the National University of Engineering, UNI, occupied their university, as a last resource in the search for democracy of the country, and autonomy for their university. They are now the 4th university of Managua to have their alma mater as a bastion.

Today, also, a minimal dialogue-table consisting of three representatives of the government, three of the opposition, resumed the collapsed dialogue of last week.

I had an agreement with a friend from the students´ movement to visit UNI, and also an interview with a contact within the Catholic university, UCA, at the opposite side of the street, afterwards.

On my way to the meetings, it soon became clear that they most probably would not become reality. Watching the news real time on the way (I did have a driver!), it became clear that UNI was under attack by the paramilitaries which were using the Sandinista Radio Ya, right beside UNI, as a point of departure. Which, according to the news, was being put on fire.
From a long distance, we saw the smoke of the radio station burning.
We also saw Toyota Hilux trucks without number plates and blinded windows, on the streets.

These have become part of the urban scenery of Managua the past weeks, transporting the infamous turbas to their destinations. They are paramilitary forces recruited among young Sandinistas, organized by vice-president Rosario Murillo, as well as among disciplined civil police.
Marginalized young men and women, as well as gang-members and delinquents, are allegedly also among the ones who violently attack the protesters, mainly students and other young people, against a modest payment, the police looking the other way.
But anyone who might be an “enemy” is in danger, including journalists, which has been clear from the beginning of the protests, with one dead journalist and many wounded among the victims.

We took a long circle around the universities in order to get close to them and by foot, I made a last attempt to get at least to the appointment at UCA – UNI was definitely excluded by now. But at the rotunda of Ruben Dario, a couple of blocks away from the universities, I realized that it would be impossible. 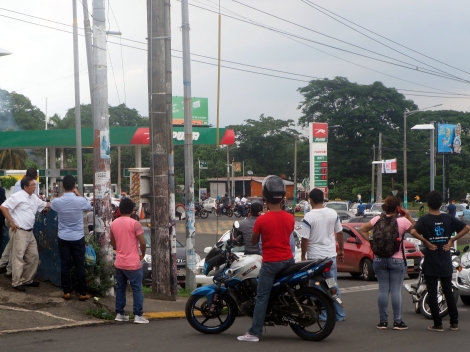 From a distance, people were keenly observing the situation.

Closer to the rotunda, taxi drivers and people mounted on motorbikes were seemingly trying to protect the entrance from the round-about towards the universities.

But the shootings from the university areas increased, got closer and people, including me, left in a hurry. Bullets were whining in the air. According to an elderly man, running along with me, they were real bullets, not of rubber.

Behind we left young people, preparing Molotov-cocktails, to defend themselves against the government forces.

They may not have gotten away. According to media, one person died, 40 were wounded.
Many are reported disappeared. Local media and international news agencies, which apparently appeared just after I left, have horrifying recordings of desperate young people being mounted on the trucks of the government forces and taken away.
A student, with whom I have been in touch since almost the very beginning, says his sister, who works at the local hospital, is in desperate need for more medical gear for the many wounded.

The minimal dialogue-table reached a – minimal – consensus: No more violence.

But a whole country is in chock and anguish and with little confidence, as time goes.
The big insecurity is about how the army – which so far has been stable and has assured it will protect civilians – will react. (Fake?) reports on the army training opposition students from the government´s association of students, UNEN, are circulating in social media.

The 30th of May, the day Mother’s Day in Nicaragua, mothers and other dependents of at the time being more than 80 dead, have invited to a mass mobilization.
Hundreds of thousands are going to be on the streets. Perhaps millions.

A whole country in anguish and suspense.