Yesterday, May 9th, the opposition of the Ortega-government, once again, took to the streets of Managua, convoked by the students and the peasants, that is, the anti-canal movement.

There was a Sandinista counter-demonstration elsewhere in the city. It had been announced that it would be postponed for security reasons, following the recommendations of the Centro Carter and Cardenal Leopold Brenes. But that this not happen, though.

All social classes seemed to be present at the protest against the government, and all ages, but middle-class and students predominated. 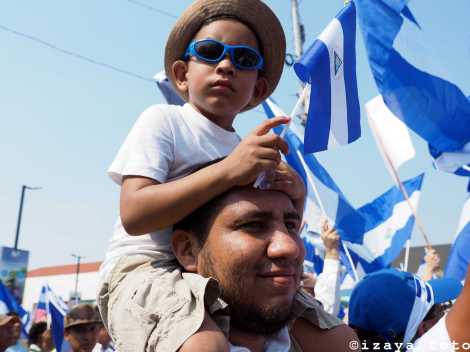 I will not talk about numbers, but it was big. See this drone-video (drones are supposedly forbidden in the country) and judge for yourselves!

Yes, there were thousands, and yes, people were united, demanding justice and democracy. But everything is not always about quantity, but quality. The demonstration was slow, crowdy, messy, loud and there were lots of explosions and smoke from morteros, artisanal bombs made of gunpowder wrapped in paper, throughout the mobilization.

Young women are just as belligerent as young men

Young people – students? – once again, started burning down the main symbols of the government: the metal trees, created by VP and spouse of Ortega, Rosario Murillo. In the midst of thousands of demonstrators.

Minutes after this picture was taken, young people started burning down the tree

According to local media, some 9 trees out of 140 have been burnt down throughout Managua. But burning down a tree in the midst of thousands of people is a risky thing and while some reacted with excitement and joy, others passed by scared and disgusted.

Violence and vandalism might be the last thing that the opposition should me symbols of these days.

During the demonstration, I heard comments such as:
“When are they going to talk?” Who is leading the march? “What is the message of the march?”

After almost four weeks of protests, the question is: What do the students want? The rest of the opposition? And how? When?

But I also heard overwhelmed remarks. Guillermo, a student from Upoli – one of the main bastions of the student protests – and an activist from the very beginning, exclaimed:

“This is unbelievable! All of society supports us – and our fight is for everyone, the old, the young, the workers, the farmers”.

The other day a coalition of several students´ organizations appeared announcing that they had their representatives for a national dialogue and pronounced their conditions for a dialogue to take place.

This is positive news if it wasn´t for the fact that they at the press-conference were flankered by representatives of opposition parties. Where is the autonomy of the students? And what is the signal of this towards the government and society in general?

In an attempt to understand who the young are, and what they want, I tried to make an overview of the organizations that are part of the coalition (in Spanish).

Another good news is that intellectuals who don´ t belong to the establishment presenting alternative analyses are being listened to. For those who understand Spanish, in the following video, sociologist and political analyst Adolfo Hurtado, gives an interpretation of Nicaraguan political culture.

Regarding the present crisis, it is less about persons, more about a political culture prevailing since post-colonial times, where cycles of power end with collapse because the concentration of power gradually gets weaker until it loses legitimacy. And the political culture is exactly what the students are questioning, for the first time in Nicaraguan history, Hurtado suggests. This, in the best of the cases, could lead to a new, more legitimate, state/political system.

Below some more glimpses of the march: 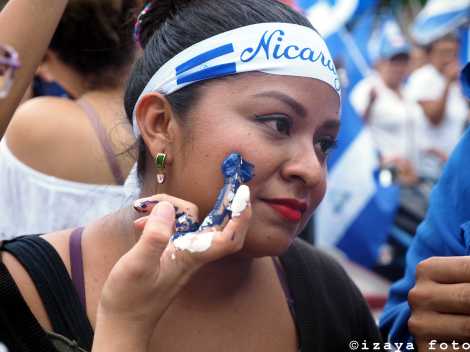 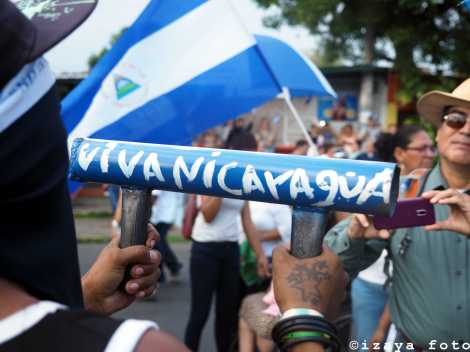