Nacatamales are the national dish of Nicaragua. But I had lived in the country for quite a while before trying them for the first time. You don´ t get them anywhere. Usually they are not sold in restaurants, but mainly from private homes and during the weekends and fiestas like X-mas. Look out for the handwritten signs outside of private homes. They are, however, lately also being sold from supermarkets – see references below.

Nacatamales are a dish based on corn mass – masa – and a number of other ingredients – animal as well as vegetarian – wrapped up in platain-leaves and cooked in water. They are product of a time-consuming process, lasting 2-3 days. And they are very much so estimated and a big pride of the Nicaraguans and the Hondurans – also in the neigbouring country the nacatamal is a classic.

The traditional nacatamales are huge – they weigh about one pound. The corn mass is traditionally boiled in lard of pork. That itself is pretty heavy. And the filling is – depending on tradition, social class, location – rather simple consisting of either pork or chicken and  some vegetarian ingredients like rice, tomato, potato, chile and mint. The more you “advance” in social class and according to e.g. the status of the holiday, the more complicated and “luxury” the nacatamal gets.

Today a “luxury” nacatamal, besides the basic ingredients,  consists of e.g. olives, raisins, capers and  prunes. All imported products. These luxury nacatamales are generally consumed during the big holidays and/or among the economically more privileged classes.

To my first experience…A mess, literally. Just opening the package is an art in itself. And it all rolls out in front of you if you aren´t careful, in a big yellowish mess. It doesn´t look very aesthetic. And half-way through the dish, the first time I was not only stuffed, but also exhausted. Of all the corn and the lard. Definitely not a morning-meal to me!

But yet, I started to get hooked. The mixture of ingredients is incredible – and in the best cases it works so well. Sweet, sour, hot, animal, vegetarian in this incredible package, so local, and yet so international.

And, it´s not a breakfast. It´s a dish for special days and consumed, in the company of the family, as a “brunch” or a “resaka” (hangover)-killer. Afterwards you are expected to take a siesta! It is generally consumed with black, sweet coffee and white bread. I personally don’t like the white bread–part:  a lot of carbohydrates anyway!

For those who are interested in history/anthropology, the nacatamales are a “tell-tale” of Nicaraguan history.  I will paraphrase Carlos Mántica, a famous Nicaraguan historian, writer and linguist, among other things. In the introduction of Jaime Willock´s “La Cultura Alimentaria de Nicaragua”, Mántica states (my translation):

“A good nacatamal in that sense becomes an exquisite telling of history: There are traces of early migrations of the Nahuatl culture, based on corn and with a whit of  achiotl, chili, bell pepper and tomatl, in their Nahuatl names; the potato, a Quechuan name that speaks of trade between  Nicaragua and Peru, its place of origin, and that was the first great American contribution to European cuisine and the solution to hunger and then hit England and the Nordic countries; the rice that came to America in the Chinese Galleon – along with pepper, cloves, cinnamon and ginger – from the Philippines and today totally necessary at our tables; the pork and lard that were the great contribution of Spain to the Nicaraguan diet: The pig  because that soon became the meat of the poor and one of our first domestic animals”.

In other words, a mouthful of nacatamal is a bite of pre-colonial, colonial and post-colonial Nicaraguan history!

That said, I will introduce you to the complex preparation of the nacatamales, the complexity being the reason why this dish only with difficulties could be converted into an industrial product.

There are as many ways of preparing a nacatamal as there are cooks. But here comes a procedure, based on preparing the corn mass manually instead of using maseca, corn meal, to make the masa.

Corn and vegetables are minced in a mill, mixed with water:

The mixture is boiled for several hours, regularly stirred, either lard or vegetable oil being added, perhaps some more vegetables:

The filling is prepared in advance. The meat is chopped and marinated, the most important ingredient being the achote which gives a particular, bitter-sweet flavour and, perhaps even more so, a characteristic red colour, to the meat:

The other ingredients – potato, bell pepper, tomato, onion, olives, cilantro, rice, chile, mint, and on occasion, capers, raisins and prunes –  are cut into small pieces and put into separate bowls:

The wrapping – the  plantain leaves –  have also undergone their own preparation separately. The leaves  have carefully been chosen for their quality, cut into suitable pieces and neatly arranged, ready for careful and skilled wrapping:

The nacatamales are assembled, one ingredient by one: 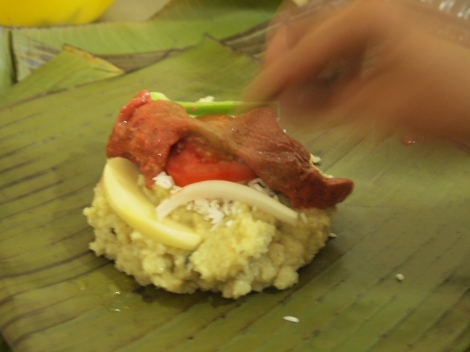 The bundles are tied together:

Then  pressure-cooked or steamed for several hours:

In this particular case, the nacatamales are vacuum-packed and neatly labelled: 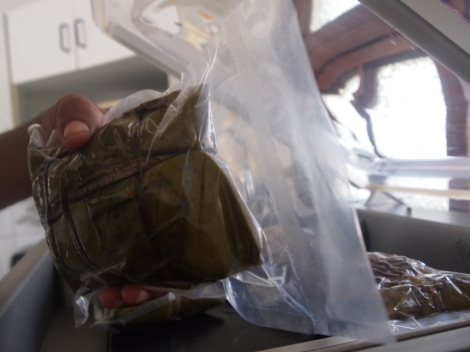 These are the luxury-nacatamales of my mother-in-law, Dolores Diaz Lacayo. Her speciality are “light” – without lard or other animal fat – as well as the small  “finger” – nacatamales.  They are either based on pork or chicken. And certified by the Ministry of Health. For more information, contact her at: dodila45@turbonett.com.ni , or at: (505) 8880 8007. Visit Doña Dolores´website here.

They are in Managua sold at La Colonia, Porta´s, Stop and Go, Supermercado Express, am -pm  and from Doña Dolores´ own house. Since Dona Dolores´ nacatamales are vacuum-packed, many foreigners, who have fallen for this very particular dish, have put it into their suitcases travelling to Argentina, Canada or Sweden! 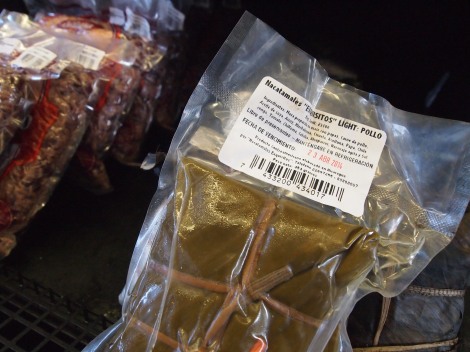 One response to “¡Nacatamales!”